What Motivates one to Become a Disciple


What motivates people to be disciples –  followers of God!

After many years of knowing about God, I began to read biographical books of Christians disciples in the workplace. Often these people faced with difficult problems in their secular jobs and asked God to help them. The testimonies were impressive. How could Jesus know about astrophysics or electronics?

Several years ago while doing research for a book, we conducted a survey to investigate what motivated people to follow Jesus. Here are the questions we asked:

·         When did you realize there was more to your faith than just attending church?
·         What were the circumstances that caused you to go deeper in your relationship with Jesus?
·         Was there another person who modeled maturity or challenged you to seek more from God?
·         How did that person help you grow?

The responses were interesting in that most respondents were motivated by need. Less than 20 % were swayed in a church service, a revival, or special events. Continuing support for a deeper walk with God resulted from the ongoing care of a small community such as a home group. In almost every case a mentor or faith community continually challenged each to continue to grow.

In the fifth chapter of Luke’s Gospel, we see an encounter between Simon Peter and Jesus in which Peter realizes that Jesus is more than an itinerant rabbi. Simon had followed Jesus around for several months as his ministry spread in Galilee. He watched as Jesus turned the water into wine at a wedding in Cana. He had seen Jesus heal people of all kinds of diseases and cast out several demons.

So when Jesus was teaching at the Sea of Galilee he didn’t mind letting Him use his boat as a platform from which to teach. Then, when Jesus finished and the crowds dispersed, He turned to Peter and offered him a gift.


“Simon, take your boat out into deep water and let down your nets.”

“Nobody fishes in broad daylight in the ” thought Simon. “This Rabbi grew up in a carpenter’s shop. He may know theology and wood-working, but he sure doesn’t know fishing. But I’ll humor Him.”

In spite of Peter’s doubts, they caught so many fish that their nets were about to break. So Simon called James and John to come and help pull in the greatest catch of their lives. 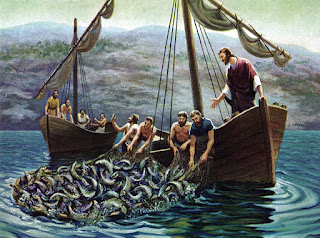 Realizing now who Jesus was, Simon fell to his knees and begged Jesus, “Oh Lord, depart from me for I am a sinful man.”

Peter, a fisherman, had a need for fish to provide support for him and his family. Apparently, Jesus knew more about fishing than Peter realized!

Jesus merely replied, “Come and follow me.  I will make you fishers of men.”

My Sea of Galilee experience came when asked to investigate a problem on one of the Navy's newest and most complex ships. As an electronics engineer, I understood the principles of electromagnetics and had worked on a variety of avionics equipment, but had never been aboard a ship larger than my cousin’s ski boat. My escort led me to the radar room - filled with electronics equipment lining all four walls and more racks down the center of the compartment. 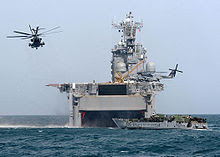 As we approached the malfunctioning navigational system I prayed out of desperation, “Lord, help! Now!”

The technician explained what the equipment was supposed to do and what it wasn’t doing. Miraculously the issues became clear in my mind and I began to clearly understand the source of the problem.  After asking pertinent questions and getting good answers, the solution became obvious. It did not come to me as a result of superior intelligence or expertise in these matters.  It came to me from the creator of the universe who knows all things sees all things and rewards those who earnestly seek Him.

The total time that it took to come up with the solution was thirty minutes. However, it took three years of bureaucratic battles before total implementation was obtained. During that time others proposed alternative solutions that were subsequently tested and rejected because they did not work. Finally, the solution the Lord proposed was finally accepted.

It was at his time that I realized that following Jesus was the answer to all of my needs.

Over the next decades as an executive in the aerospace and military electronics industry, the Lord never failed to guide me to the proper solutions.

If God can help fishermen make a major catch, engineers to solve serious naval ship problems, and transform human lives, He is relevant today despite what secular humanists say.

Making Disciples is not part-time work.

Discipleship programs often fail because the pastor or leader is unwilling to devote the time to work with individuals. Too often a program is set up to try to disciple many people at one time. Successful disciplers commit time to understand the needs of the person with whom they are working and commit to becoming a mentor.
Posted by Bill Johnson - Aslan Ministries at 3:02 PM No comments:

Resolve the Conflict in DC 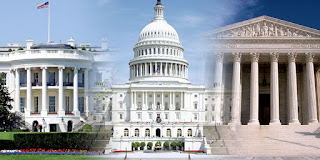 What is the problem?

I try not to watch the evening news anymore! That’s a strange feeling for someone that has been a news junkie all his life. But times have changed. The elephants and donkeys are at war, fiscal conservatives can’t get along with social conservatives, and progressives are fighting moderates.

I understand that conflict is inevitable but reasonable heads need to deal with it properly. If an organization is going to move forward (or backward) there is bound to be some who object to the direction. Centuries ago Sir Isaak Newton developed basic physical laws of motion. To paraphrase Newton;

“Whenever there is a force on a body that puts it in motion there
will be an equal and opposite force opposing that motion.”

Friction is the equal and opposite force that opposes moving bodies. Therefore, any individual, organization, business, or church is will encounter serious friction when they begin to move. Friction, in turn, will result in heat - the more movement, the greater the heat.

In any organization, poor leadership can lead to conflict. Over the past half-century, there has been a decided lack skilled leadership in the Whitehouse, Congress, and our political parties. Instead of leaders, we have had politically motivated individuals placed in the top positions. 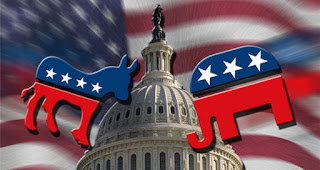 Good leaders would have confronted conflicts before they reached the impossible stages. But issues have been stuffed and solutions postponed. When major issues are not handled properly and timely we end up with the problems we have today in Washington.

Let’s take a look at how minor conflicts can eventually destroy reasonable discourse. Without intervention, conflict can spin out of control in a downward spiral. At each stage, the conflict gets worse and becomes more difficult to resolve. Therefore conflict needs to be confronted early before it falls into the next stage.


If the problem is not solved conflict at this stage it will move to stage 2.

Washington has passed this milestone decades ago.

Characteristics of this stage:
If the problem is not solved in this stage conflict moves on to stage 3. Again, we are past this stage.

Stage 3 Rights Stage - People declare their rights.  -  “I’m right so you must be wrong.”

If the problem is not solved at this stage the conflict will move into the “Removal” stage.

It looks to me we are way past this point.


If the problem is not solved in this stage it will move into the “Revenge” stage.

Aha! We are getting close!

Characteristics of the “Revenge Stage.”


The conflict has now gone way out of bounds.

It appears to me that the conflicts in our government today are somewhere between Stage 4 and Stage 5. There is still hope if cooler heads can bring the sides together.

It is time for someone to step up and take charge and set the tone for resolving the current mess! Use good conflict resolution methods!

Please forgive my shamful plug [see below] for my latest book, but the book was inspired by the present political climate in Washington.