Deliver Us From Evil

The call came in around noon on Wednesday while I was studying for next week’s sermon. I was alone in the office and it was a good time to work, study and enjoy some quiet time. An unfamiliar voice on the other end sounded hesitant and confused as if he did not know what to say or how to say it. I waited patiently to hear what he was calling about.
“Reverend Johnson,” he began, “My name is Phil Short and I am a Presbyterian pastor and currently the chaplain at Magnolia Hospice here in town. We are facing a strange situation and thought you might be able to help.”
“How can we help?” I asked expecting to talk about funeral arrangements or ministry to the family.
He hemmed and hawed for what seemed like minutes but it was probably much less. Then blurted out the question that he was not sure about how to approach. “Are you familiar with spiritual decontamination?”
Chuckling to myself over the choice of words I responded in a tone similar to his solemnity, “That term is unfamiliar to me but I think I understand what you are asking and we can probably help.”
“If you have the time I would like to come over and talk.”
“Come ahead.” This sounded more interesting than what I was about and could still finish later.
Arriving within ten minutes Chaplain Short appeared to be a gentle compassionate man with a heart for people in the last throes of their earthly life. He seemed to fit the role comforting and encouraging the patient and family through the death process.
He began to share about one particular case which had him very bewildered.
“Ms Jones is a frail, eighty year old lady, who is dying of a brain tumor. She is less than five foot tall and weighs about ninety pounds. She was so weak she hardly ever got out of bed.”
“Yesterday she said she had been attacked by demons,” he explained. “Of course I immediately went to her apartment and found it in ruins. She was always neat and tidy and her apartment had always been spotless.”
Then he asked, “Would you go with me to her place and see what you think about this situation.” 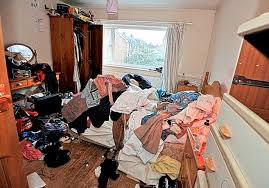 As we walked up the concrete stairs to her second floor apartment Chaplain Short whispered, “Don’t be amazed. The apartment looks like a war zone.”
The slight woman was exactly as the chaplain had described. One thing he failed to mention was the tennis ball sized tumor projecting from her forehead. The mess around her seemed to embarrass her but she politely invited us in.
The two room apartment was as described, as if a vicious battle had been fought in this small space. The large, brown, imitation leather sofa was turned completely on its side, two large fichus trees in two foot pots appeared to have been had been thrown in anger high up against the wall, the wooden dinette table with its chairs were broken into pieces and strewn around the floor.
“What happened here, Ms. Jones?” I asked.
“A demon did this yesterday. He has been attacking me for weeks but this is the first time he became violent and destroyed my home.”
Ms. Jones and the chaplain looked at me for help, but this was way beyond my personal experience.
We rearranged the sofa and each found a place to sit. We wanted to get acquainted and learn more about Ms. Jones and why this occurred. We learned that she was a devout Christian woman and had served in the church all of her life. She had recently changed churches and loved her new church. I made a mental note to talk to her new pastor as he was a friend, and a strong man of God.
It was then that the Lord prompted me to ask Ms. Jones two questions. Her response amazed me with her wisdom and forthrightness.
The mood in the room was transformed so we spent time praying and continued to visit until we had to leave because of another commitment.
I never saw Ms. Jones again, but Chaplain Short told me that her tumor had disappeared and she had been released from hospice care. She had moved to Arkansas where she lived happily for several more years with her daughter.

What were the two questions we asked Ms. Jones which changed everything?
John Dawson in his book “Healing America’s Wounds” uses an illustration of an explorer in Africa, chopping his way through a dense jungle. Suddenly his machete slips and puts a deep gash on his arm. The blood running down his arm attracts a number of flies. At this point he has a choice to make. He can stop and chase the flies away, or he can bandage up the wound to deprive the flies of a target. In spiritual warfare we can chase demons around or we can eliminate the reason they are there.
The first question was, “Ms. Jones, you are a devout Christian woman, can you explain to me why the demon was allowed to attack you?”
Most of the time spiritual attacks will come in areas of our lives that the Lord is not in control. These are areas of sinfulness, unforgiveness, and our own stubbornness where we want to be in control to do things our own way without consulting God.
Ms. Jones knew exactly what I was asking and she knew exactly where the trouble lay.
She explained, “I have been a member of my church for over thirty years. When the pastor’s wife became ill they asked me to move in and take care of her. I took care of her for twenty years until she passed a several months ago. Then the pastor told me I could no longer live there with him. I became very upset and angry and have been trying to get revenge for him treating me this way. In spite, I left the church and joined the church down the street. I guess my anger, bitterness, and unforgiveness gave the demons the excuse to attack me.”
The second question was, “Can you forgive your former pastor for the way you were treated?”
She forgave and repented for her actions. We then spent the next half hour praying with her and over her apartment.

My friend, the pastor of the church that Ms. Jones joined before we met her contacted me. He explained that they had tried to help her but were not able to. He asked if we could teach his people about spiritual warfare.

We have been teaching a workshop on Spiritual Warfare for several years. Our workshop, "A Balanced Approach to Spiritual Warfare," is available for churches or small groups from:
http://www.aslanministries.org/spiritual-warfare.html

Why do bad things happen to good people?

A few weeks ago I stepped off the curb at a convenience store in Collins, MS only to see a previously parked white Escalade roaring down on me. In reverse. There was no time to run, and there was no way I could escape being hit and hurt badly. The next thing I knew, I was laying flat on my back on the tarmac, feeling around for injuries. and drawing a crowd people wanting to help. I was alive, and miraculously the only severe pain was at the seat of my pants.

I remember thinking, “God must not be through with me yet.” When the driver saw what she had caused she began to panic. By this time I sat up and thanked God for my safety.

One week later while in Oklahoma, my wife Rita was bitten by a Brown Recluse spider and spent over a week in the hospital and is looking forward to months of pain and a possible skin graft, as the wound heals.

While these events are important to us personally, what about the earthquakes in Nepal, the tornadoes in the Midwest, the train wreck in Philadelphia or wars in the Middle East?

When difficulties arise we ask, “Why me? Is God punishing me?” “If God is almighty, why did he not stop these disasters? This leads some to the conclusion that Atheists and Deists are right. Others may not want follow a God Who would allow these things to happen.

Theologians over the years have attempted to develop sound meaningful explanations that seldom satisfies. With a loving and caring God, why is there still evil in the world?

John 16:33 (MSG) 33  In this godless world you will continue to experience difficulties. But take heart! I've conquered the world."

Other Biblical writers contributed:
James 1:2-4 (MSG) Consider it a sheer gift, friends, when tests and challenges come at you from all sides. You know that under pressure, your faith-life is forced into the open and shows its true colors. So don't try to get out of anything prematurely. Let it do its work so you become mature and well-developed, not deficient in any way.

Hebrews 12:7-9 (MSG) God is educating you; that's why you must never drop out. He's treating you as dear children. This trouble you're in isn't punishment; it's training, the normal experience of children. 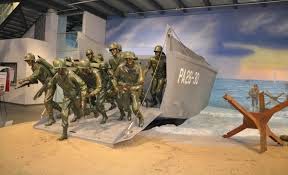 One of the best explanations I have heard is an analogy with WWII in Europe. In the Old Testament there are very few examples of bad things happening to good people. Most notably is the story of Job who was a righteous man and God allowed Satan to test his loyalty. For most of the Old Testament we see the Jewish nation suffering because of their disobedience to God. Their physical state is often a barometer of their spiritual state. Their disobedience then leads to  enemy attacks, oppression, and capture.

In the Christian New Testament, the story has changed. Now bad things are regularly happening to good people, while the incidents of punishment by God for disobedience is rare. What caused the change?

This is how the WWII analogy helps to explain. Until June 6th 1944, the Axis forces in Europe pretty
much had things there own way. On D-Day, the Allied forces invaded the enemy's territory beginning one of the most deadly times in history. Patton’s Seventh Army made great progress, but the enemy took advantage of other allied weakness and attacked and began the famous “Battle of the Bulge.”

When Jesus came into a world completely controlled by Satan and his forces, it was the spiritual D-Day. Up until then, Satan had his own way, but with Jesus cosmic invasion, the war began in earnest.

In the European Theater more lives were lost between D-Day and VE-Day than at any prior time in the war. In our spiritual war, there have been and will continue to be many casualties between Jesus’ invasion of Satan’s realm and when Jesus returns in victory.

This analogy has helped me over the years, but I would like to get your comments on this important subject.

Posted by Bill Johnson - Aslan Ministries at 10:38 AM No comments: