Where is Your Organization In its Life Cycle?

If an organization were a well-oiled machine it would never change. It would keep working as long as its parts did not wear out and if it did not lose its power source. But organizations are made up of imperfect people who have a limitations and capabilities. Their working life varies with the individual. Empirically, we have observed that organizations go through a process of initial startup, improving, and growing until they reach their peak performance. Then most tend to decline and finally cease to exist or become ineffective. This is true of social business organizations, churches, denominations, government agencies, and nations. 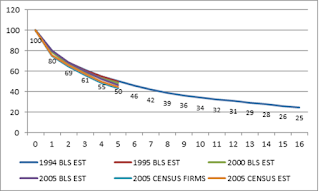 The United States Bureau of Labor Statistics reports that less than fifty percent of business start-ups will survive beyond five years. Even when an organization makes it through the initial five years, after seventeen years only one-fourth of businesses are still alive.
As Egypt declined in power in the eighth century BCE, the Assyrians, under Tiglath-Pileser III, became the power in the Middle East. Assyria then went into decline as subsequent kings were weak. Assyria was conquered by Babylon which later rose to great power under King Nebuchadnezzar. After his death Babylon declined and was conquered by the Medo-Persian Empire without even a fight. Then the Greeks rose to power when Alexander, The Great, conquered the Medo-Persians and all of the Middle East. Greece declined in power after Alexander’s death and the Roman Empire rose up until it too lost its way. Since then we have seen nations rise to power and then fall into decline. Most organizations follow this same path with a limited life.
For simplicity, we have chosen to divide the life cycle of an organization into five phases. Any business, church, or nation will go through this cycle and only strong intervention will bring renewal.
These are not the only phases one could identify, but they illustrate the point we are making that organizations are fluid and move from phase to phase. There is not a specific time frame for moving through the phases and initiating change can reverse the movement towards disintegration.
There can be hope for an organization that is in decline if it returns to its initial vision and purpose.
At the starting point of a new organization, there is a sense of destiny among the leader and his initial team of followers. There will be a strong commitment to the mission. The visionary leader communicates his vision and many are attracted to that vision. The leader’s positive enthusiasm attracts others with positive and supportive attitudes. The future is still unclear, but it does not dampen the enthusiasm of the followers. There is a mutual dependency as each – leader and followers – are willing to work long hours. In this phase, decision making is spontaneous, plans are being formulated and there is very little organizational structure. Because of this, people are receptive to change and it is easy to make course corrections. Everyone involved feels ownership. Morale and self-esteem in the organization is high. Innovation and creativity thrive in newer organizations. 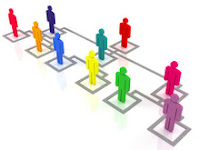 After the initial start up, a more formal organization is normally established. This heightens the sense of mission and purpose among every member. They are now more able to see the vision of the organization coming to fruition. This results in a high level of goal "ownership." People begin to give a high percentage of their time and identity to the organization. It is easy to get volunteers and hire new employees.
The organization’s structural “form” is governed by “function.” That means that the form of the structure is only created in response to the corporate functional needs. It is at this point that traditions begin to form, but it is still reasonably easy to incorporate changes and integrate them into the whole organization. Morale is still high and leaders consider suggestions from all levels. Self-esteem is easily affected by circumstances, short-term successes, and failures.

When the business has reached or is approaching “maximum efficiency,” the mission and purpose are still highly visible and well understood by everyone within the organization.
All participants or employees realize the common purpose and work together for its achievement. Even new people quickly find their place and participate enthusiastically. New programs are created to respond to new needs. Leaders freely delegate responsibility and authority and new roles are created. New proposals are given serious consideration. Morale and self-esteem are at their highest levels and confidence has become contagious. 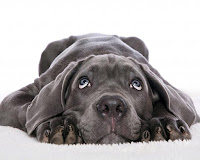 When the organization reaches the institutionalization phase, there is a lowering of members understanding of purpose. People begin to look only at their own small areas of responsibility and not extend themselves. The attitude has become, “I have done my thing, now there are enough others to do the job.”
Older participants or employees feel they have done their part and do not need to take on new responsibilities. Few, if any, new programs are added. Now the organizational structure itself creates needs, rather than responding to needs. Changes, when proposed are not considered if they radically depart from the status quo. Morale becomes polarized into two groups; high and low. Self-esteem develops uncertainties.
Institutionalized organizations are commonly referred to as bureaucracies. The following quote comes from a “Tongue in Cheek” article by historian C. Northcote Parkinson. It appeared in the November 1955 edition of The Economist. Parkinson typifies an organization in the institutionalized phase.
Parkinson’s Law roughly states, "Work expands so as to fill the time available for its completion."
This is a good definition of “Institutionalization.” Parkinson based his theory on studies of the British Admiralty over fourteen years from 1914 to 1928. In that period the number of capital ships in the fleet was reduced by sixty percent while the staff at headquarters increased seventy-five percent. Parkinson actually created a mathematical formula predicting an institutional growth of between five and seven percent per year, regardless of the amount of work required.

Where: “x” is the number of new staff needed each year; “k” is the number of current staff seeking promotion through hiring new subordinates; “p” represents the difference between the age of appointment and retirement age; “m” is the number of man-hours devoted to responding to memos within the department; and “n” is the number of units overseen.
The cost involved in this institutional expansion cannot be sustained and will ultimately lead to disintegration.

In the disintegration phase the organizational purpose is lost and mission not understood. Programs are eliminated for lack of participation. It is difficult to recruit new participants and/or employees. Ten percent of the workers are doing ninety percent of the work. Funding has become difficult and services are being reduced or eliminated. The primary focus is on preservation and survival. At one board meeting, I attended, the president made an announcement that the companies largest customer was undergoing a slowdown and their purchases would be reduced by ten percent. His solution was to raise his prices ten percent to compensate for the reduction in the number of parts the customer ordered. That same company had never produced a five year plan. When they were encouraged to plan ahead, the response was, "We've never done it that way before. We do not even know whether we will be here in five years."
In the disintegration phase, Leaders rationalize why goals cannot be achieved. Morale is at an all-time low. Leaders do not know how to stop the decline resulting in frustration and despair among workers whose self -esteem suffers.

Posted by Bill Johnson - Aslan Ministries at 10:06 AM No comments: