Are you a turtle? 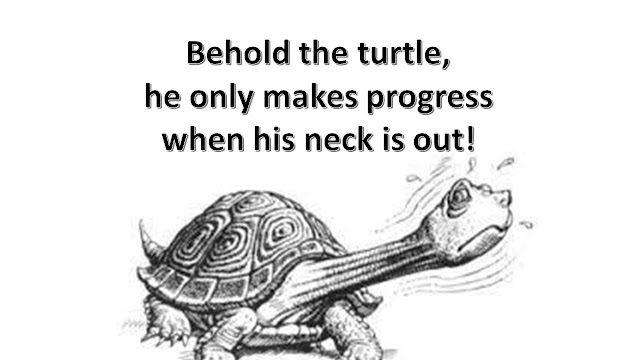 Are you a turtle?

That is the question we all asked one another.

Are you making progress?

It started when I was a young US Army lieutenant stationed in Germany. As the commanding officer of a new, one of a kind, data communications network, there were no guidelines, experience base, nor directives to fall back on. They left us to our own devices.

In such a situation, there are commonly two ways one often reacts to required decisions - play it safe or stick your neck out and go for the gusto. Torn between a fear of repercussions and my drive to accomplish our mission, I worried over each challenge.

Then I came upon that cartoon picture of a turtle with the caption:

Behold the turtle, He makes progress only when his neck is out.

That was my answer. I immediately took a copy of that cartoon to a graphics designer and had him make a small poster that I could hang on the wall. I mounted it on a sheet of Masonite and sealed it with clear plastic. That small poster has hung in all of my offices for the next thirty years. until I lost track of it in a move. I rediscovered it while packing for our move from Mississippi to Oklahoma. It still has my name, military rank, and year typed on the back.

That short quotation has empowered me over the years.

There are four things that terrify me; heights, bridges, failure, and rejection. A drive to grow and succeed at my chosen vocation(s) counterbalanced these fears. Growth and success do not come to people who sit by and wait. Inaction guarantees failure.

Every time I hesitated about deciding, I would ask myself, “Am I a turtle?” Most often I would answer, “Yes.” Several times I stuck my neck out and walked away from very secure and comfortable places, stepping into the strange and unknown. But there were also times when I did not stick my neck out and later regretted the decision.

The original author of the "behold the turtle" quote is unknown. Some have wrongly ascribed it to James B. Conant, a chemist who was the President of Harvard University from 1933 to 1953 who employed this motto during a speech at Wellesley College in 1949, but he did not take credit; instead, he attributed the expression to unnamed atomic scientists.

The earliest known source of this quote is from a 1945 article describing the cartoon on the wall of an office at the Oak Ridge National Laboratory in Tennessee, crafted by an unnamed project engineer working on the Manhattan Project.

Wherever this adage originated, it sends a powerful message to us all, "Take the risk."

In the Bible, Abraham, left a comfortable life in the great city of Ur, to go to a desolate land he knew nothing about and he became the father of many nations. The disciples stuck their necks out when they left their jobs, families, and homes to follow Jesus. and they changed an entire world.

Author Virginia Postrel writes about the major battle for the future of the nation, between “Dynamists” and “Stasists.”

Dynamists do not fear making mistakes because they grow from their mistakes as a learning process. There is spontaneity and wild abandon in dynamism. We usually can correct mistakes. Creativity flourishes in this environment.

Dynamists are the turtles. They stick their necks out.

It is when you are in your comfort zone that it is time to be a turtle. When you are comfortable, there is little progress.

Are you a turtle? Are you making progress?

Posted by Bill Johnson - Aslan Ministries at 8:37 AM